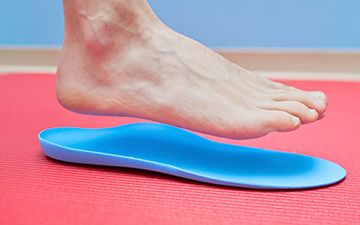 Custom-Made? All Orthotics Are Not Created Equal

Understanding the difference between what is custom-made and what is not is the key in getting the correct orthotics device to relieve your foot symptoms. There are many in-shoe devices that are referred to as “orthotics” but are in fact just generic shoe liners.

Insoles, arch supports and other ready-made products including “stand on the box” systems that deliver on-the-spot solutions are not custom orthotics. Nor are the orthotic systems that have you walk across a “special” mat. Despite the colourful pictures, these systems only measure pressure; they do not and cannot capture the unique three-dimensional shape of your foot.

The medical term for orthotics is ORTHOSES. A custom-made orthotic is a medical device that fits into your shoes for the purpose of controlling abnormal motion of the foot, or to redistribute excessive plantar pressure.

For an orthotic to be considered “custom-made” it must have been created from a three-dimensional, volumeric image of your foot. The current gold-standard to create this 3-D image is to use Plaster-of-Paris. Newer technologies, such as three-dimensional scanners will also create the correct type of image for a custom orthotic. Any other technique is generally not accepted by insurance carriers and will be rejected as a “custom-made” device.

Only chiropodists/podiatrists are certified to design and dispense a custom orthotic. Once a three-dimensional image has been generated, and an appropriate prescription written it must be sent to a certified orthotic laboratory with the designation BAPFOL (Board for Accreditation of Prescription Foot Orthotic Laboratories). Only after this, does one truly receive a “custom-made” orthotic.

Will a Custom-Made Orthotic Help You?

Not sure if you should look into custom orthotics? Book an appointment and ask for an assessment!

How are Custom Orthotics Made?

Custom-made orthotics begin with a three-dimensional volumeric image of your foot. Then, your chiropodist/podiatrist will write a prescription outlining the desired features of the orthotic. The design of the device will be based on their assessment findings and your pathology.

Your “casts” will then be sent to Paris Orthotics Laboratories, which is one of Canada’s pre-eminent accredited orthotic manufacturers (BAPFOL) and the lab of choice for the most technically demanding foot healthcare professionals. Paris Orthotics employs highly skilled technicians who use a combination of state of the art CAD/CAM technology and old fashioned hand craftsmanship to make your orthotics.

Within approximately two weeks your orthotics will be ready for fitting. At your fitting appointment we will check for proper fitting to your feet and footwear. We will also give you any follow-up appointment instructions and information about how to break-in your custom orthotics.

Make an Appointment now to ensure that your next pair of insoles are truly custom-made orthotics!

You're reading our blog appropriately called foot notes. Our mission is not only to offer complete foot and ankle care but to also share information - our foot notes - to improve your quality of life. Our clinic is dedicated to providing you innovative and effective podiatric care.

We want you to know exactly how our service/site works and why we may need your details. Please state that you have read and agreed to these terms before you continue.